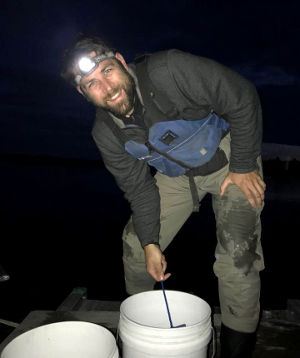 Steve Crawford has worked throughout western North America for over 15 years and has a large amount of experience operating in remote locations. Since joining Blue Leaf/LGL he has worked with juvenile and adult salmon, resident freshwater fish species, and a variety of marine fishes. As a field biologist he is involved in the planning of operations and responsible for the implementation of the studies on the ground. He has been involved in radio telemetry studies on the Susitna (AK), Columbia (WA), and Peace (BC) rivers including installing and maintaining remote fixed stations, aerial tracking, and the capture and tagging of target species. Mr. Crawford has played a large role in a number of mark-recapture population estimates including adult Chinook Salmon escapement on the Nushagak River (AK) as well as Coho Salmon smolt abundance in the Chuit, Fish, and Niukluk rivers (AK). Other recent work includes monitoring juvenile Sockeye Salmon using upward looking sonar in the Bristol Bay region of Alaska, and estimating adult salmon escapement in Rivers Inlet, BC using a DIDSON. He has extensive experience conducting field work and writing technical reports.

Mr. Crawford graduated from the University of Idaho with a B.S. in Biology in 2006.